I’m going to start a new series for the blog here, for now called It’s New To Me, where I will take a look at older comics I’ve missed out on, somehow never got around to, or just found out about. Or maybe I’ve had them for awhile and didn’t get to them in a Timely Fashion (was that a Marvel joke? Was that a joke?) so let’s kick things off with something I’ve heard a lot about Omega: The Unknown. Strap on your sideburns, hang your coke-spoon necklaces in your thickly matted chest-muff, and lets travel back to the 1970’s when the D-double-E-J-A-Y’s didn’t have to wear headphones to be on the radio (I’m looking at you Dr. Johnny Fever) and people hadn’t started throwing doughnuts at Anne Wilson from Heart yet.

Steve Gerber fascinates me, I haven’t read too much of his stuff yet, in reality I’ve barely scratched the surface. Every thing that I have read by him shows both a wonderful humanity, and not the tortured artist, but a tortured soul. I could have sworn I wrote about Infernal Man-Thing after I first read it, not long after I had quit drinking (954 days ago, but who’s counting) there was something that hit me hard at the time in the characters awful, internal fears manifesting physically to destroy the author (? Jeez I should reread things if I’m going to reference them.) and since then I’ve dipped my toes here and there into a bit of Gerber’s stuff, Omega was one I kept waiting on though. I bit the bullet last night, after seeing Marvel Unlimited was only a penny for the month and downloaded the 10 issues that made up the initial run of Omega: The Unknown. I knew little to nothing about the series going into, except for the fact that a lot of other fans, and other bloggers I look up to hold the series in pretty high regard. Enough of the background, what did I think of the book?

The story opens on an alien world with titular (Hee-hee!) Omega fleeing some sort of robotic, humanoid creatures and descriptions of what is going on in the mind of Omega. If there is one thing I want to highlight as a takeaway from this issue right off the top it is the captions of a couple panels on page 3. “AN ORGANISM CEASES TO LIVE WHEN IT CEASES TO GROW. THE ELEMENT OF CHANGE, WHICH LOOMED SO TERRIFYING—WAS IN FACT THE ONLY HOPE OF SALVATION. TO RESIST, TO DAM THE FLOW, TO GO RIGID…WAS TO ABANDON ALL HOPE.” Put that in your pipe and smoke it, hell, take it to the frat-house and let Chad. Fat Gary, and Black Steve (Apologies to Vince from Filmdrunk) pour it in the funnel so you can butt-chug it, bro! In all seriousness though, that is good stuff, as someone who was trapped in a pretty deep, self-destructive hole that was based really, in fear, things like that can just stick in your head. Change is fucking scary, it’s not an easy thing to face sometimes. But change leads to growth, to strength you never knew you possessed, and the fear of change can lead to death. And there it was right there in a funny-book, words to live by. 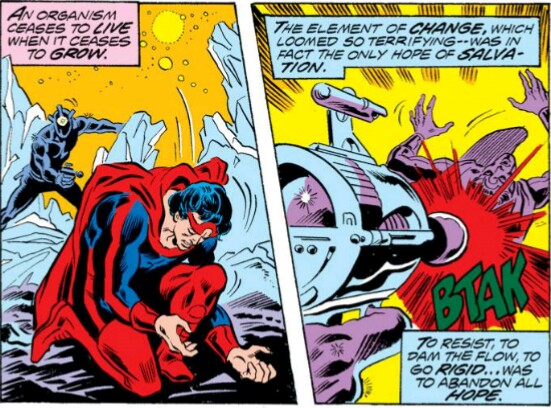 Omega takes a laser blast to the back, on Earth, a young man screams. A young man named James-Micheal Starling, who has the same hair and eye color as the super man at the beginning of the story. His parents rush to him, and we see that while not named at the time, James-Micheal and his logical almost emotionless manner would probably place him on the spectrum these days. He has been home schooled all of his life and his parents have finally enrolled him in another school, trying to convince him he needs the life experience of interacting with others. They leave for his new school, and along the way there is a car accident that kills his parents.

Except his Mother keeps talking to him after she has been decapitated, exposed metal and wires coming from the base of her neck. She warns him that only the voices can harm him, before her head melts in a genuinely, impressively disturbing series of panels. The next page does a good job of the expressing the sensory and psychological overload James-Micheal experiences, before he is overwhelmed and shuts down.

I don’t want to do a total breakdown of everything here, this post would be thousands of words long, and more boring than I fear it’s already getting and I’ve only made it to page 6. Good job Gerber and Skrenes for giving us our two main characters and introducing a crazy twist so fast. Is this where I start bitching about decompressed comics, and how if Bendis wrote this book it would be 6 issues for this first third of the issue? All New, All Different Omega: The Unknown Now, This Time Omega Is A Lady For Ye, Granted, A White Lady Written By A White Guy, But Still, Look Upon Our Prominent Female Characters, Just Don’t Expect Any Merchandise #OmegaCorps #LetsEatBreevoortsHat

Sorry, it was the voices I just told you about. Oh right, Omega is being held captive, working up the resolve to escape captivity and flee the planet. Back on earth James-Micheal (never trust a guy with two first names) wakes up in a hospital, his strange, eerily calm demeanor unnerves his nurse and intrigues the Doctor on duty. The Doctor wants to keep James-Micheal around, but there isn’t enough funding to keep this recently orphaned kid, that just came out of a month long, shock induced coma, in the hospital. They hatch a plan to have James-Micheal move in with his nurse Ruth and her roommate Amber.

Who is Amber? She tells it like it is, she’s got the attitude, the belly-shirt, the bell-bottoms, and is apparently a Daily Bugle photographer (we find out in an issue or two, who gets a photo credit as just Amber, did she ever show up anywhere else? Was she a Bugle employee in the Spidey book?) who makes quite an impression on James-Micheal . While his thoughts turn to Amber, and he contemplates this new feeling () one of the robots bursts through the window of his hospital room. Not far behind it, is Omega. There is a fight, and a recognition from James-Micheal that he has seen Omega in his dreams,and with his desire to protect Omega, James-Micheal fires blasts of energy from his hands, just like Omega can. Wordlessly, Omega gathers the robot, and leaves James-Micheal in the hospital, Dr. Barrow enters the room and thinks that James-Micheal destroyed the room and injured his hands in some sort of fit. The last panel is a close up of James-Micheal’s hands, burned onto them, where the blasts fired out, the Greek letter Omega. Duhn-Duhn-Duuuhhnnn!!!

As I said up top, I went into this book fairly cold, not knowing much about the characters, or even what the hell this book was about. I still don’t. I’ve read up to issue 3 so far, and I’m sure I’ll finish this series in a day or two. The question that remains is, what did I think of it?

I loved it. I really did. It’s intriguing. Who is Omega? What is Omega? What is his connection to James-Micheal? Why is James-Micheal so analytical, and nearly emotionless? Is it just the way he was raised? The androids that raised him, were they simply hiding him, protecting him? Are Omega and James-Micheal one and the same? Is he some sort of projection of James-Micheal? Is he from the future? It’s not a light and fluffy book. It gives you a lot to think about, it sticks in your head, and makes you want to read more. It must have been hell to wait the 2 months between issues when it was coming out. I know there are only 10 issues of the series, and I have a feeling I’m going to be frustrated by the lack of answers I get within these 10 issues, but, man, do I want to get back to reading them.

Sorry to be so long-winded, and to just go through the beats of the story like this. I’m still chewing on this issue and I had to write something, rambling and strange as it was. If it sounds like something you would like to check out, give it a read, sign up for Marvel Unlimited and use the promo code PENNY to get Marvel Unlimited for the month, for a penny. And sound off in the comments, have you read this series? Do you want to? Don’t get too deep with spoilers, at least for a few days until I have time to finish the series. Thanks,