Get ready for an over-sized jumping on point! 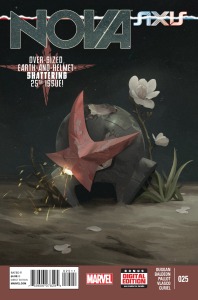 One of my favorite Marvel books of the last couple of years has been Nova. The current incarnation of the iconic character is an adolescent named Sam Alexander. He grew up believing his dad to be a drunken loser who cleans toilets at his school and often tells farfetched tales of space and adventure. To further cement this image of a loser in Sam’s mind, his dad up and leaves Sam and his family. Later we learn that Sam’s father was actually a member of the elite group of space cops known as the Nova Corps and that those stories from earlier were actually truths. Sam inherits his dad’s helmet and begins to learn the ropes of being a superhero.

Fast-forward to issue #025. After a scrum with an intelligent Axis version of the Hulk and dealing with a concussion Sam is taken to the Avengers mansion by Steve Rogers where he assumes he’s going to get a scolding. Instead he is issued an ID card and is welcomed into the Avengers fold. While partying with his new colleagues a call for help comes in and Sam will have to act with his team to save a plane in distress. He gets to feel what its like to be part of something bigger. With a busted helmet and busted brain, Sam has to return to a normal life but reflects fondly on being part of the Avengers team.

Spider-Man is in this issue quite a bit. I can’t help be feel that he’s here to show us what Sam will grow up to be and that no matter what obstacles are thrown his way he’ll survive and become a better hero because of it.

The part of this book where Sam works with the Avengers to save the plane reminded me of the first time I played in a good band. You realize everybody has their part and that moment when all the parts click together just feels right.

Another element of this book that I feel a connection to is older people harping on younger people just because the older people think they know better. As I approach my 40s I can tell you age/experience does not always trump smarts and passion. Sam gets scolded for not waiting for back up when fighting Axis Hulk. If Sam had waited more lives would had be been lost, possibly even his own family’s. He put others before himself. I’d never give somebody the gears for that.

While creative teams have changed a couple times on this book I still find it fun and funny. Personally, I believe if Marvel wanted to counter DC and Shazam with their own kid movie I think Nova would be the hero to do it with.