I haven’t been able to post much lately, but my garage is almost cleaned out. See how Carol the Space Avenger is doing after the jump.

Captain Marvel is in SPAAAAAACE! Carol and her cat Chewie are transporting an alien, hoping to find the new planet where her people have settled. Naturally, Carol’s ship is attacked, even after she identifies herself as both an Avenger and working as medical transport. Carol gets out and starts kicking some ass, and the Guardians Of The Galaxy show up. I was hoping with Carol back in space, and the Starjammers showing up again recently, we would get to see them here. Not yet (*fingers crossed*) I bet Kelly Sue would write some great Starjammers. The Guardians come aboard Carol’s ship to assist with repairs and Rocket Raccoon is hilariously upset by Carol’s cat, trying to kill it on sight. Funny stuff. The patient awakens, hears that Star Lord has ties to the Spartax Empire(his dont’cha know, though they aren’t on good terms) she flips, attempting to kill him. It also seems that the planet Torfa, where her race was to have settled is a “Poison Planet”, a victim of a plague in the past with, the current settlers again getting sick and looking to be transported off world. The alien makes a break for it, taking off with not only Carol’s ship, but her cat. 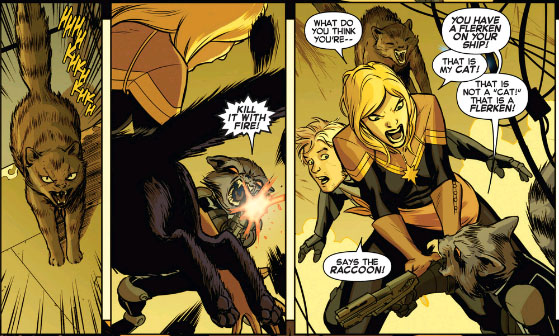 “Kill it with fire!”

There are a lot of reasons to grab this book, the first of which is a fun and funny script from DeConnick, plus a solo female hero headlining her own book, from a fantastic writer is a great thing to see. Oh and the book is beautiful, David Lopez is great, with clear action scenes, great facial expressions and some cool spaceships. Colors by Loughridge are great as well, clearing using different lighting to give you a definite sense of place in the different sections of the ship. A fun book all around. My only real complaint, and it’s not even a complaint, is that I sort of would rather have had the Starjammers here instead of the Guardians in another book, not that I dislike them, but with Carol’s history with the Starjammers, I would love to see them now that she’s in space again. Good stuff!