Atheist Tiki Hour is the new book from Logospilgrim, an author whose previous book, There’s A Hula Girl On My Dashboard, I wrote about (here). Pour yourself a drink, and follow me past the jump, and let’s kick back for a few. 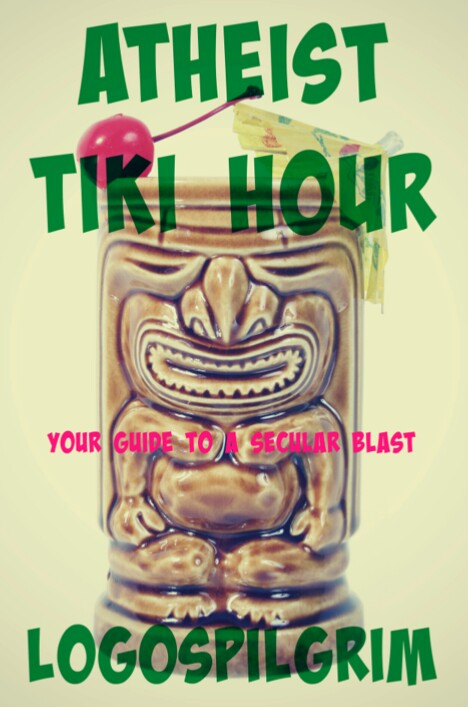 “Come meet your maker, boy. Some things you can’t enjoy. Because of Heaven/Hell. A fucking wives’ tale. They put it in your head, then put you in your bed. He’s watching, say your prayers, cause God is everywhere. Now I’ll play a man learning priesthood, who’s about to take the ultimate test in life. I’d question things because I am human, and call no one my father who’s no closer than a stranger. I won’t listen!” Fucking Hostile – Pantera

Atheist Tiki Hour is like a late night conversation at a party, one of those unexpected, talking until sunrise, conversations with a stranger, where you go so deep, that when it comes time to say goodbye you are still basking in the afterglow of intimacy. Not the post-coital kind either.

The author talks to the reader, not at the reader. It really does feel conversational. She talks about her own journey of growing up religious, of the years spent trying desperately to make sense of it, beating herself up to fit into the box of religion, and finally realizing that not only was it not needed, it was abusive. She writes about how hard it was to change her thinking, to learn to love herself, and to live life on her terms.

That’s the thing about religion, it is exclusionary, it is abusive, and it is about control. For a country that likes to jerk itself off about how Christian it is, very few of these so-called Christians seem to heed the words of Jesus. Remember when Jesus said, “fuck the poor, the disabled, the sick, the gays, go forth and discriminate in my name,”? Of course not. He didn’t say shit like that. But so much hateful garbage is done in his name.

Back to the book… Like I said, it’s a conversation. The author talks about her experience, her problems with religion. Does she say that all people who go to church are bad people, or that everyone who has faith in some higher power is evil, or deficient? Never. Not once. Does she point out, that some atheists can go to far, and get off on bashing people for their beliefs (and sound like assholes)? She does.

This isn’t a recruitment guide, or an attack. It’s the authors’ story. Where she was, where she is, and how she got there. It’s a beautiful thing, and I’m so grateful she shared it. Every time I read a book from Logospilgrim, I feel so close to her, I feel like I know her even better, and then I get a little bummed that we don’t talk more, and we aren’t like, best friends. Pick up the book here, celebrate your humanity, make a friend, be good to each other.